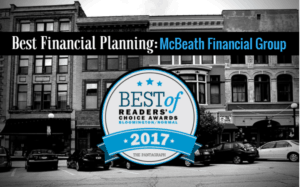 I have been busting at the seems to share this news, and now it has been officially released!  As those in the McLean County and surrounding areas know, each year, the local newspaper allows its vast readership to vote for their favorite businesses in several categories.  It was an honor to be nominated for five of these categories and an even bigger honor to have received First Place in both Best Financial Planner and Best Tax Preparation Firm for the 2017 Pantagraph Readers' Choice Awards!

For years, I’ve hoped that I could earn that level of respect.  I did receive a nomination and honorable mention in one of the categories several years ago.  However, with so many great firms locally and many of them being much larger than McBeath Financial Group, I just didn’t think it would happen.  I certainly wasn’t anticipating two first place winners as well as three other awards!

I’ve had many successes and awards that I have been proud of, and I expect that will continue.  Most of my awards are based on hard work, and I receive recognition from companies and my peers in the industry.  You will see some of those awards around the office if you look.  Although it’s a nice nod to success, it is not my style to flaunt such things.  In fact, I often am conflicted with a marketing team that insists on making a big ordeal out of such honors.  (Seriously, you would not believe the reaction I received when I decided I wasn’t applying for the Million Dollar Round Table after being a Court of the Table Member!)  Those types of awards just really aren’t that important to me.

However, this particular award is very meaningful and personal to me.  Not just because of the surprise or the fact that readers chose McBeath Financial Group over so many other larger firms.  It is because of who chose us.  It’s my customers and my community that showed their support and took the time to vote for us.  I care about the people I have the privilege of serving.  It’s not really important that I get industry awards because what’s important to my customers is if I serve them as individuals, make a personal connection and help them achieve their goals.  That’s the most important and rewarding thing to me as well.

So, although I feel honored, these awards are really all about the amazing people who have been such loyal friends of McBeath Financial Group! We've truly been blessed and I’m humbled by the outpouring of support you’ve shown me!  Thank you!

* By visiting this link to the pantagraph award winners, you can view all of the categories voted on and all of the winners chosen by voters, including McBeath Financial Group.  Winners in each category were chosen by Pantagraph.com viewers who were given the opportunity to nominate and then vote for businesses or individuals in each class.  McBeath Financial Group did not make any solicitation payments to the Pantagraph in order to be nominated or to qualify for nomination of the award.  The official rules as were posted onsite by the Pantagraph have been duplicated below. 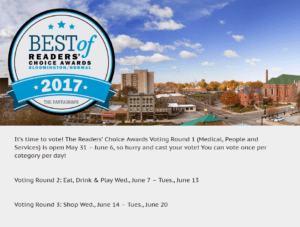 Third-party rankings and recognition from rating services and publications do not guarantee future investment success. Working with a highly-rated advisor does not ensure that a client or prospective client will experience a higher level of performance. These ratings should not be viewed as an endorsement of the advisor by any client and do not represent any specific client’s evaluation. Please contact the advisor for more information regarding how these rankings and ratings were formulated.